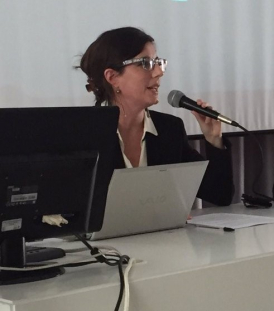 Linda Bertelli is an Associate Professor in Aesthetics at IMT School for Advanced Studies Lucca, where she is also a member of the Faculty Board of the PhD Program in “Cognitive and Cultural Systems”.

She got her PhD in Philosophy at the University of Pisa (Italy) and has been Marianne DiPalermo McCauley Visiting Scholar at the John D. Calandra Italian American Institute of the City University of New York (USA).

She has presented her research at conferences, seminars, and lectures held in Italy and abroad. She is a member of scientific societies (Domitor; SISF) and serves on the Italian Society of Aesthetics national board.

In addition to the two books on Henri Bergson’s theory of image and representation (2014) and on Ernst Bloch’s aesthetics (2018), she has published essays on Étienne-Jules Marey and chronophotography, on the work of the Italian feminist theorist Carla Lonzi and on contemporary feminist aesthetics.

She won the «New Aesthetics Award» (2011), an Italian National Award by the Italian Society for Aesthetics, and she is part of the research teams of some national and international projects.

She is the scientific director of a two-year project (2022-2024), co-funded by the Tuscany Region, on archives and photographic collections in the Lucca area.