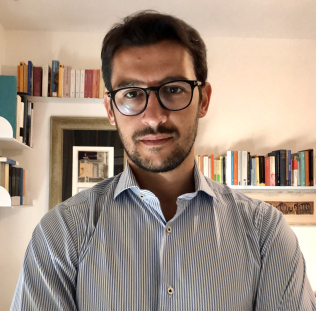 Riccardo Olivito is an Assistant Professor in Classical Archaeology.

He has earned his Master's Degree in Classical Archaeology at Pisa University (2008) and his PhD in Art history and Archaeology at the Scuola Normale Superiore (2012). In 2017 he was appointed a Fulbright Visiting Scholar at the Institute of Fine Arts, New York University.

He has been a Professor of Archaeology of Magna Graecia at Pisa University (2015) and, since 2013, Junior Research Fellow at the Scuola Normale Superiore.

His research has focused on the study of public spaces in the Greek and Roman worlds and the use of images within their original display contexts. An example of his approach to these topics is represented by Il Foro nell’atrio. Immagini di architetture, scene di vita e di mercato nel fregio dai Praedia di Iulia Felix (Pompei, II, 4, 3), [Bari 2013], the monograph in which he examines a Pompeian painted frieze representing the public square of the Vesuvian town.

Since 2008 he has supervised several archaeological projects in Southern Italy (Kaulonia) and Sicily (Segesta).

Since 2016 he has been coordinating the PRAEDIA Project (Pompeian Residential Architecture. Environmental, Digital, Interdisciplinary Archive). This research program aims to contribute to a deeper knowledge of Pompeian residential spaces through an extensive program of multidisciplinary investigations in Pompeii’s Regio II.

Since 2012 he has been collaborating on and supervising several virtual- and cyber-archaeological projects aiming at developing new tools and methodologies to visualise and analyse heterogeneous archaeological data within immersive virtual environments.

More recently, Riccardo Olivito has started a new research project on the perception and representation of space and monuments in Greek and Roman art, combining art historical and archaeological methods with tools from perceptual psychology and neuroscience.